Hooray, the garage called a couple of days later to say it was all done and it was being road tested, after the tracking had been adjusted, following the fitting of the new steering rack. I was walking our little dog when I received the call, so I extended the walk down to the garage. I paid the bill, first time I had paid a bill for labour for Stella, collected the MOT pass page, it is such an insignificant document theses days, can't really call it a certificate.

A few days later, we drove down to Dover to visit the Castle. It was my birthday and the sun shone brightly, it was more than warm enough to have the roof down all of the way and even at motorway speed with the Breeze Breaker fitted behind our heads,  there is very little wind buffeting in the cockpit. 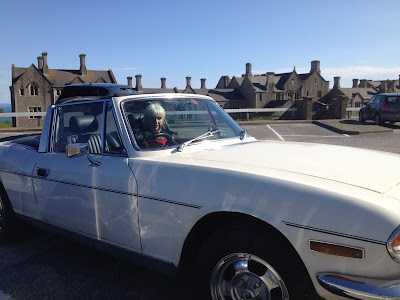 There is so much to see at the castle, as much underground as above, we are certainly getting our monies worth from our English Heritage membership this year. The weather stayed beautifully clear, I have never seen the French coast so clearly before, but eventually it was time to head back to Surrey and our favourite pub for a birthday dinner.

We headed up the A2, planning to bypass Canterbury before joining the M2. The sky was still and clear, but Jacquie did notice the magnificent white towering clouds ahead of us in the distance. As we left the M2 to cross over to connect with the M20, the clouds disappeared from sight and memory, until we turned onto the M20 and there they were again. Not white now, but black and heavy and we were almost underneath them. I manage to turn off the motorway, park and get the hood up and promptly rejoin the M20. I thought for a while that we might skirt around the rain, but I was so wrong.

Thank God we had put the roof up, the rain bounced off the road, roof, windscreen, fortunately most of the other cars on the road slowed down, but of course some idiots continued to thunder past. There was a flash of lightening and an instant clap of thunder, which made us both jump, as everything eventually ground to a halt, at which point an extremely cold jet of water streamed in from the top right hand corner of the windscreen on to my right thigh and down between my legs. I dragged a large micro cloth from the parcel shelf to absorb the flow, but fortunately as soon as we started to move again the rain stopped coming in.

The good news was that Stella never missed a beat during this torrential downpour and apart from the one leak the cabin and Jacquie was dry. Initially the heater steamed up the screen, but that quickly cleared and by the time we reached the pub the rain had stopped and my trousers had dried out sufficiently not to cause embarrassment. A great day and the contrast in the weather has made it all the memorable.

Mac & Jacquie Court
70 now and our five wonderful years aboard our narrowboat Skyy seem along time ago. Jacquie, allowed me to build my replica three wheeler kit car, which was a great success. Now it's time to start on a bigger project and that is to make a good Triumph Stag even better, here goes.